A Forecast for the D&O Market

In the 1700s, mapmakers often used the phrase "Here be Dragons" to warn sailors of dangerous conditions on uncharted corners of the maps. For brokers and risk managers navigating their way through the Directors & Officers liability market, the "dragons" are growing in size and number. As a result, it's helpful to examine several factors behind the current turbulence, including an increase in the frequency and severity of Securities Class Actions (SCAs), record settlements in derivative claims, the continued emergence of event-driven litigation, and increased claims costs.

SCAs remain the main driver of D&O losses. According to Cornerstone Research's 2019 Midyear Assessment, plaintiffs filed 198 SCAs in the first size months of 2019 - 87% higher than the 1997-2018 historical average. If filings continue at this pace, 2019 may set a new record, exceeding last year's 403 lawsuits. Since there are fewer publicly-traded companies in the United States now than in the past, the impact of this spike in frequency is magnified; the chances that a public company will be subject of an SCA are significantly increased. In 2018, 8.4% of publicly traded companies were named in an SCA, compared to the historical average of just 2.9%. Removing the less severe "merger objection" claims improves math somewhat, but not much: Based on filings to date, 5.2% of public companies will face a tradition SCA in 2019, an 80% increase over the historical average. For larger companies, the statistics are even worse: 9.4% of S&P 500 companies had a traditional SCA in 2018, and 2019 is tracking to a rate of 6.5%.

Severity in SCAs is up across the board. In 2017, the cash value of SCA settlements was $1.5 billion. In 2018 it was $5.1 billion. This troubling trend is likely to continue since today's claims are being filed against companies whose share prices and market capitalizations reflect stock markets at an all-time high. For example, according to Cornerstone Research in the first half of 2019 there were six "mega" lawsuits filed alleging Disclosure Dollar Loss (DDL), a one-day loss in a company's market capitalization at the end of the class period of at least $5 billion, and 11 suits alleging Maximum Dollar Losses (MDL), loss in market capitalization between class period high and end of the class period of $10 billion. According to Cornerstone, filings in 2018 had the largest associated losses in market capitalization on both a DDL and an MDL basis since the Reform Act was passed in 1996 - and through the first half of 2019 we are on pace to break both of those records. This trend is likely to continue to drive D&O claim severity.

The events triggering SCAs have also changed. In the not so distant past, a quarterly earnings "miss" would typically be followed by a stock drop and an SCA. Today incidents that appear on the front page as opposed to the business page - think of opioids, privacy breaches, wildfires and #Metoo allegations - have all led to an increase in what has been classified as "event-driven" litigation. Other event-driven suits have arisen from product recalls, allegations of design flaws, climate change, and other fact patterns that read more like a consumer class action than a securities case. This is both a severity and a frequency issue, as illustrated by the $480 million Wells Fargo settlement (2018) involving abusive sales practices, the $175 million British Petroleum settlement (2017) arising out of Deepwater Horizon oil spill, or the recent $175 million McKesson opioids settlement (2019).

While the Cornerstone study reveals a slight decrease in the number of so-called "merger objection" lawsuits, these cases still present a significant challenge for policyholders and insurance carriers. Additionally, a more threatening "relative" of the merger-objection suits is seeing something of revival. These are traditional SCAs arising from post-merger integration issues. Through Q3 of this year, almost 40 suits have been filed based on purported merger integration issues, double the average for this type of claim since 2011.

Derivative Suits on the Rise

The "bomb cyclone" of SCAs may have obscured another danger lurking in the current litigation landscape: the increasing threat of derivative suits. A derivative action is a lawsuit brought by shareholders on behalf of the company against the company's directors and officers, usually alleging that they breached their fiduciary duties. While data around derivative claims are less reliable (for several reasons, including the fact that many are filed in state courts), the consensus view emerging in the D&O market is that we are seeing a material increase in both the frequency and severity of shareholder derivative settlements, 2019 has the dubious distinction of being the year of the largest derivative claim settlement in history, Wells Fargo's $320 million settlement (a companion to the $480 million SCA settlement referenced above). Several other derivative cases now in the pipeline appear to be trending toward settlements in the mid to high eight- and even nine-figure range. If the plaintiffs' bar continues to obtain eight and nine figure settlements, the impact on carriers will be especially profound for the simple reason that, due to the historical derivative suit loss patterns, excess A-Side pricing did not account for derivative claim losses of this magnitude. These policies have largely been priced for perfection. (?) As a result, large derivative losses will be especially painful to the balance sheets of many D&O carriers.

Adding to the gale force winds facing the D&O market is a significant increase in the costs of defending lawsuits filed against companies and directors and officers. Hourly rates for attorneys and experts continue to increase. Plaintiffs now routinely name as defendants virtually every officer or director marginally related to an alleged wrongdoing. Many times they also include non-officer employees and managers, particularly when the definition of "Director" or "Officer" in the policy has been expanded to include such personnel. Each defendant often wishes to retain separate counsel, which also significantly increases costs. Moreover, in the current litigation environment, with large numbers of opt outs and an increase in related claims subject to the same limit of liability, it is impossible to reliably predict how much money will be needed to resolve all claims covered under a particular policy. Finally, several new "emerging" plaintiff's firms have adopted a new business model targeting smaller companies whom they perceive as more susceptible to quick settlements.

The trends discussed here are to blame for much of the adverse loss development emerging for D&O carriers, but the industry's challenges don't end there. The United States Supreme Court's decision in Cyan Inc. v Beaver County Employees Retirement Fund held that SCAs brought under the Securities Act of 1933 (the statute governing securities offerings) can be brought in state as well as federal courts, rejecting the argument that a more recent statute - the Securities Litigation Uniform Standards Act of 1998 - eliminated state court jurisdiction for these claims.

All of these factors contribute to a rising rate environment that is likely to continue for some time. Unlike with past market shifts, this one is not a reaction to one or two major events. Rather, the fundamentals of the exposure of the litigation exposure have changed - necessitating a fundamental change in how insurers need to analyze and price risk. Just how much of a correction is coming remains to be seen, but it is likely that it will take insurers - especially those long-entrenched in the D&O market - years, not months, to respond to the new normal. In order to steer their way through the current conditions, buyers and brokers should focus on partnering with stable carriers who are committed to providing long-term, tailored solutions and whose approach to handling claims reflects that claims is the product of their insureds are buying, from day one. 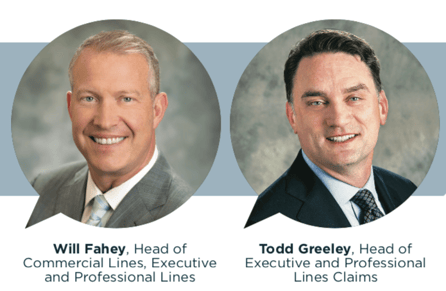